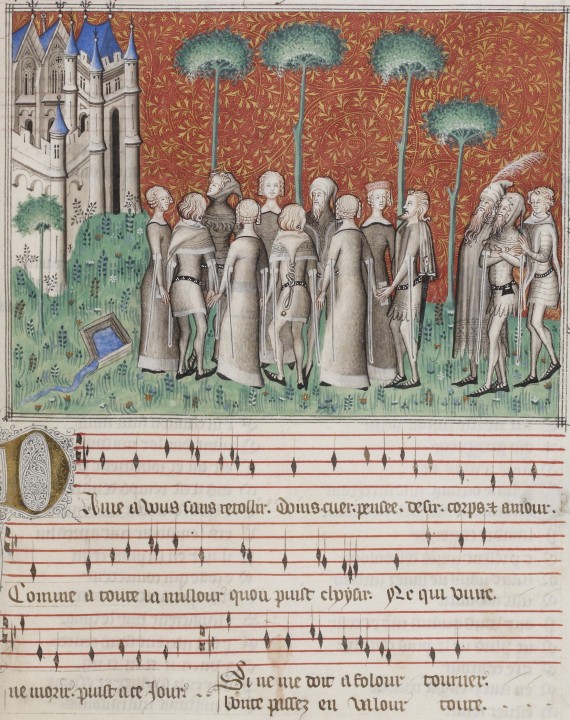 The last quarter of the 14th Century marks the beginning of an outstanding period in Western culture; within this context, Machaut’s oeuvre was completed and a progeny of innovative followers began their work in Italy and France.

But how exactly did the noble rhetorician influence Italian composers? At the dawn of the 15th Century, Machaut’s works were not known except for a scant number of compositions transmitted by Venetian and Florentine scribes, whose taste and choices acted as a considerable filter. Moreover, the most important key to Machaut’s entire creative work is to be found in ars rhetorica, the art of rhetorics, in which Parisian masters excelled throughout the Middle Ages. Machaut, both as musician and poet, well represented the multiple qualities of rhetoricians. He was defined as the great poet in new forms who imposed all sorts of new strophic structures; even the taxonomical passion with which he ordered and classified his own works (applying the rhetorical principle of dispositio) may be seen as a rhetorical gesture. Thus, some elements that point to Machaut’s influence in Italy are the final victory of mensura applied to both music and versification, the wide circulation of the ballata as a strophic form, the fact that some of his poems were set to music by Matteo da Perugia and Anthonello da Caserta at the Angevin court in Naples and the Papal Court in Avignon, while Codex Bonadies includes some instrumentally revisited compositions. Following this stringent evidence, we have imagined this concert as a “rhetorical machine” respecting a classic structure, so that an exordium will be followed by dispositio, narratio, peroratio and epilogus.